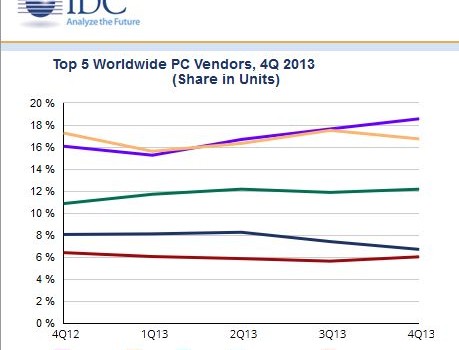 The global PC shipment market is expected to total 300 million units in 2015, a decline of 4.5% over the 2014 figure. “We do not expect the global PC market to recover until 2016,” commented Ranjit Atwal, Research Director at Gartner.

The mobile phone market, on the other hand, continues to show growth, particularly in emerging markets, where prices continue to fall. China, notably, is driving the smartphone market. Nevertheless, Annette Zimmermann, Research Director at Gartner, noted that, “We have witnessed fewer and fewer first time buyers in China, a sign that the mobile phone market there is reaching saturation.”

Worldwide combined shipments of devices (PCs, tablets, ultramobiles and mobile phones) are expected to reach 2.5 billion units in 2015, a 1.5% increase from 2014, but down from the previous quarter’s forecast of 2.8% growth, according to Gartner.

“The tablet market is hit by fewer new buyers, extended life cycles and little innovation to encourage new purchases,” noted Roberta Cozza, Research Director at Gartner. “At the same time, the value of a smartwatch for the average user is still not compelling enough, and the impact of these wearables on tablet purchases remains negligible. The tablet has become a ‘nice to have’ device, and there is no real need for an upgrade as regularly as for the phone.”

Gartner analysts also perceive users as relying more and more on their smartphones as functionality increases and screen size standardizes at around 5 inches.

As a result, Gartner has extended the average lifetime of the tablet to three years by 2016. “We also expect the tablet market to reach a penetration close to 50% of households in mature markets by 2016,” added Cozza.

The view from IDC

According to analyst firm International Data Corporation (IDC), the global PC market continues to decline ahead of the release of Windows 10.

Worldwide PC shipments totaled 66.1 million units in the second quarter of 2015 (2Q15), according to IDC’s Worldwide Quarterly PC Tracker. This represented a year-on-year decline of 11.8%, about one percent below projections for the quarter.

China-based Lenovo was the leading PC vendor in 2Q15, with shipments of 13.4 million units. Volume was up 1% from the prior quarter, but down 7.5% from the same period a year earlier.

Taiwan’s Acer Inc. continued to see growth in Chromebooks, having introduced additional models in this relatively new segment. The vendor ended 2Q15 with overall PC volume sales of 4.33 million, a significant decline from the prior quarter, and down 26.94% year-on-year.

Taiwan-based ASUS (ASUSTek Computer Inc.) was statistically tied by IDC with Acer for the number 5 position in 2Q15, with sales of 4.33 million units. ASUS had been affected by “currency factors and inventory management”, but strong growth in the US boosted overall results, despite a year-on-year decline of 7.7%.

“We continue to expect low to mid-single digit declines in volume during the second half of the year with volume stabilizing in future years,” commented Loren Loverde, VP, Worldwide PC Trackers & Forecasting. “We’re expecting the Windows 10 launch to go relatively well, though many users will opt for a free OS upgrade rather than buying a new PC. Competition from 2-in-1 devices and phones remains an issue, but the economic environment has had a larger impact lately, and that should stabilize or improve going forward.”