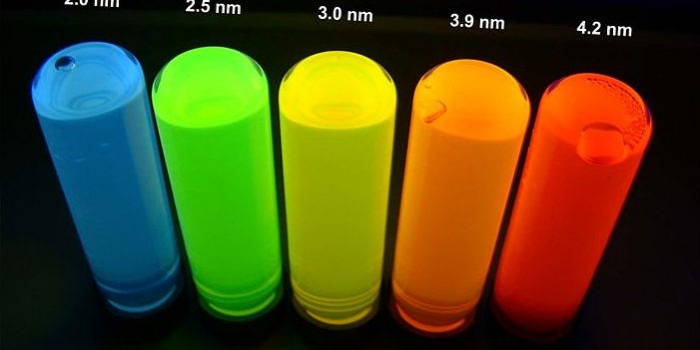 The back story to the use of QDs in TVs is the delay in bringing affordable organic light-emitting diode (OLED) TVs to market. While self-emissive OLED displays, free from the inefficiencies of backlighting, have been the holy grail of the global display industry, their commercial development has been frustratingly slow, for a variety of reasons. And when OLED TVs have been produced and put on the market, their price has put them beyond the reach of the average consumer.

QDs were quickly recognized as one possible way to “cut to the chase” and achieve the brilliant color quality of OLED technology cost effectively, affordably and relatively quickly. In other words, QDs promise at least ‘close to OLED’ quality TV for the average consumer living room.

In practice, TV makers have, to date, encountered difficulties in achieving a purely self-emissive QD display. Instead, they are usually using a layer of QDs to produce precise bright reds and greens, in combination with blue LED backlighting, for a richer RGB light source delivering a 100% NTSC-standard color gamut. To date, LCD TVs have usually delivered only 60-70% of the NTSC-standard color gamut.

Although cadmium-selenide nanocrystals have been frequently used as a ‘wide-bandgap’ semiconductor for QDs in the R&D labs, concern for the environment has placed TV makers under considerable pressure not to use heavy metals, such as cadmium, in their products. Cadmium-free quantum dots (CFQDs) have been developed in response. The Manchester, UK-based Nanoco Group plc is a case in point.

In March 2015, Nanoco published its 2015 Interim Results, highlighting how the company was making major progress in the commercialization of its CFQD technology, in partnership with worldwide licensing partner The Dow Chemical Company (“Dow”).

Optimism for the performance-enhancing impact of QDs on the TV industry grew rapidly in early 2015, bolstered by market research, as well as by the 2015 Consumer Electronics Show (CES), which confirmed QDs as  a technology breakthrough for the worldwide TV industry.

In Part II of this quantum-dot technology blog post, we’ll take a look at some of the products that had debuted by mid-2015.